3adfcf455ccd768d
Home » culture » Did You Know Cushites Are Grandchildren Of Noah AS?

Did You Know Cushites Are Grandchildren Of Noah AS?

Definition of Cushites is a dish made by frying or boiling cornmeal or crumbled cornbread with grease and often other ingredients such as pieces of meat or onion. The Cushitic language – named after Kush, the grandson of Noah علة سلام, is spoken in Ethiopia,

A diagrammatic explanation that Cushites are divided into two, the southern Cushite(Yaaku/Sanye

and Dahalo/Waata) and the Eastern Cushites (Somali, Rendile, Borana, Gabra, and Orma) 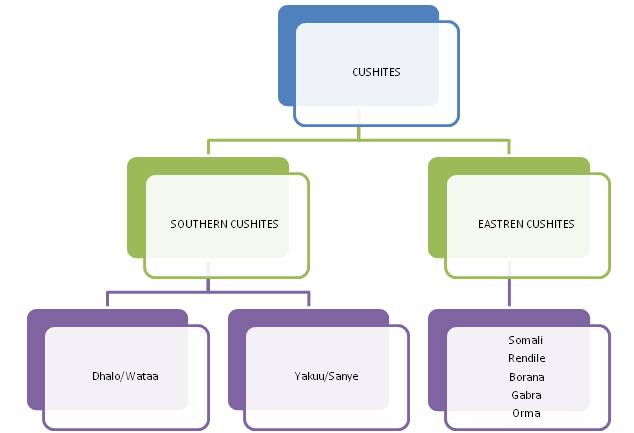 The term was first introduced by Joseph Harold Greenberg (May 28, 1915 – May 7, 2001) was an American linguist, known mainly for his work concerning linguistics in the 1950s. The Afro-Asiatic language are generally related and form a linguistic phylum that consists of five branches, each having the status of a linguistics family :

The name Semite comes from Shem, the eldest of the three sons of Noah.

They are spoken primarily in the Horn of Africa, with minorities speaking Cushitic languages to the north in Egypt and Sudan, and to the south in Kenya and Tanzania.

are a group of languages spoken in southwestern Ethiopia.

They are also known as Imazighen and are an ethnic group who are indigenous to North Africa, specifically Morocco, Algeria, Tunisia, Libya, the Canary.

Reason for the migration of Cushite

Who were the Cushites in the Bible

Kush also was the home of the rulers of the 25th dynasty. The name Kush since at

least the time of Josephus has been connected with the biblical character Cush, in the

The sons of Ham — Cush, Egypt, Libya, and Canaan — were the ancestors of the

peoples who bear their names. The descendants of Cush were the people of Seba,

Havilah, Sabtah, Raamah, and Sabteca. The descendants of Raamah were the people

of Sheba and Dedan. Cush had a son named Nimrod, who became the world’s first

great conqueror. By the LORD’s help, he was a great hunter, and that is why people say,

“May the LORD make you as great a hunter as Nimrod!” At first, his kingdom included

Babylon, Erech, and Accad, all three of them in Babylonia. The descendants of Egypt

were the people of Lydia, Ana.

3 thoughts on “Did You Know Cushites Are Grandchildren Of Noah AS?”