8 Ways To Develop A Growth Mindset. 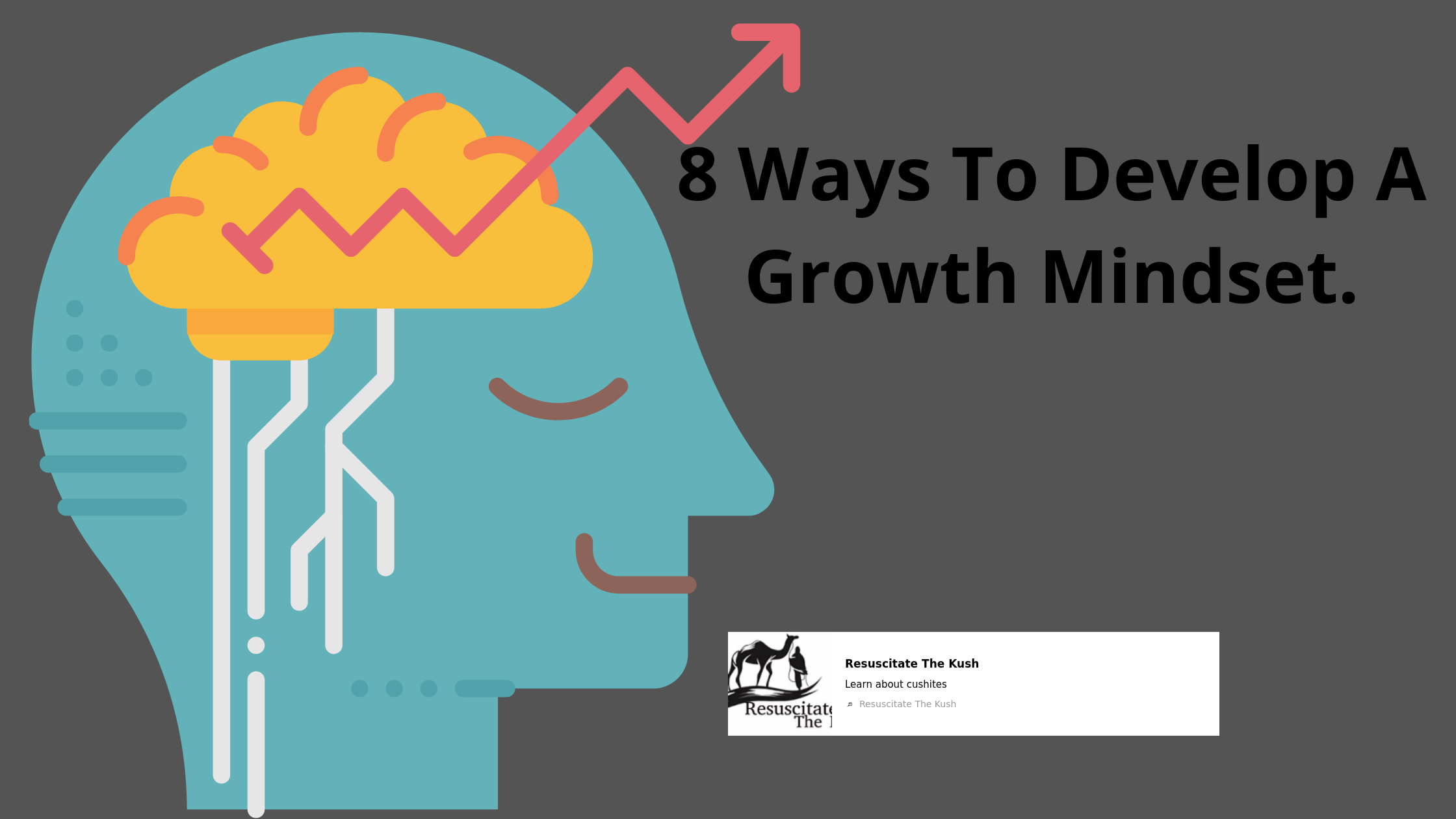 A  growth mindset is a way in which an individual views their ability to learn. In a growth mindset, an individual believes that improvement is possible through the dedication and hard work. The term was coined by Carol Dweck, a psychologist at Sandford University.

A growth mindset is a belief that people are capable of learning, growing, and bettering themselves. With a strong growth mindset. You believe that your abilities are not fixed but can be mastered with dedication through experience. This idea is commonly contrasted with a fixed mindset. Which is based on the belief that innate talent alone separates successful people from struggling people. A fixed mindset is a belief that you are either born with certain abilities or without them.

The difference between these two mindsets has a great impact on your motivation, resilience, and performance in many domains of life. (e.g., intelligence, sports, business). If you believe some abilities are fixed-that people are either smart or not. Then you’ll think that a person must have a certain level of intelligence to do well in school, sports, or business.

If you’re not born with the necessary abilities, then you have no hope of being good at these things. In contrast, if you believe your abilities can be developed through hard work and education. (e.g., a growth mindset), Then you’ll be more likely to take on challenges and stick with them. People with a strong growth mindset get better grades in school. Learn new sports skills quickly, and work well with teammates. Also, learn about how to overcome self-sabotage.

If you have a fixed mindset, though. You may shy away from challenging tasks because of the fear of looking stupid if you fail.

1. Be aware of a fixed vs growth mindset.

It’s hard to develop a growth mindset if you don’t even realize it exists. To raise your awareness. Consider how you react in the following situations. You have trouble learning new computer software for work and think digital skills are just not your thing.

Go through your day and look for other examples where you are attributing either success or failure to innate ability, rather than effort. Are you underestimating the importance of practice? Do you believe that some people are just more talented at certain things and this makes them destined for greatness no matter what they do? Think about your own abilities and the abilities that people around you possess. Do they seem innate or could they be developed with time and effort?

2. Commit to a growth mindset.

When you realize your fixed mindset is holding you back, commit yourself to learn about this topic. When you’re aware of something, it puts you in the driver seat and gives you the power to change it.

Then, read about the topic and find ways to implement a growth mindset at work and in your personal life: To raise your self-efficacy. (i.e., belief that you can achieve what you set out to do). Do something new that you think you might fail at. You can sign up for an improv comedy class or take a weekend cooking class. The main thing is to step out of your comfort zone and practice challenging yourself until you achieve success.

3. Be hard on the problem, soft on the person.

When something goes wrong, it’s easy to label yourself as incompetent or stupid. Instead of thinking “I am so stupid”, think “this was a stupid situation and it’s unfortunate that I made those mistakes”. Then, figure out how you can use this experience as a learning opportunity rather than letting it bring you down.

4. Push yourself to failure.

One of the most effective ways to learn is by pushing yourself beyond your limits (i.e., the point of failure) and then reflecting on what happened. Instead of aiming for success, aim to stretch yourself. The idea is to stay open-minded and embrace failure as feedback about what you can do better next time.

Your ability to come up with creative solutions depends on your ability to notice things you haven’t noticed before. When your mind is set on the outcome, it doesn’t allow itself to look at things from a different perspective. This limits your problem-solving ability because there are usually multiple ways of solving a problem.

When something goes wrong in life, people often use this as an opportunity to make excuses. Your mind is quick to come up with a reason, even if it’s a pretty bad one because this saves you from feeling at fault or responsible for the mistake.

Do you often find yourself saying things like “I’m too busy”, “I don’t have enough time”, and “it’s not my fault”? These are all excuses because you are shifting the blame to something else (e.g., I am too busy). Instead of making excuses, assume responsibility for what’s happening and figure out what you can do about it.

6. Be careful with praise.

When someone succeeds at something, we tend to attribute this success to his or her innate ability. For example, if your friend got a 95 on an exam, you might think “she is so smart”, but the more appropriate response would be “she studied really hard for this class”.

When children are praised for their innate abilities (e.g., being smart), they are less likely to take on challenges because why would they need to put in the effort if they are already good at it? Instead of praising the outcome (e.g., getting an A), praise the process (e.g., studying hard).

One of the most powerful ways to develop a growth mindset is through active listening: Listening with your full attention, without thinking about what to say next, and focusing on the other person’s point of view. When you listen to others, it shows that you value their opinions and ideas. It also helps them feel heard which makes it more likely for them to open up in future conversations.

Mistakes are inevitable and we often learn the most from them. Instead of thinking “I can’t believe I made this mistake”, think “mistakes happen and it’s what you do after a mistake that counts”. When you attach less value to the result, your mind becomes more open to taking on challenges because you don’t have as much pressure on yourself to succeed.

When you have the right mindset, the result is just one of many steps towards reaching your goal. It’s not about being perfect or beating others, but about learning from your choices and gradually getting better.

So, how can you develop a growth mindset? The good news is that there are many ways to do so, and we’ve listed just a few here. What matters most is that you start making the effort to change your thinking and see yourself as someone with potential for growth. Are you up for the challenge? We would love to hear about your experiences in developing a growth mindset – share them with us on our blog or social media pages!

1 thought on “8 Ways To Develop A Growth Mindset.”